Competition will be fierce for home hunters this season: Zillow

The U.S. housing market narrowed by 9 percent over the past 12 months, with the majority of available inventory out of reach for all but the highest earners, according to a new Zillow report.

With inventory in continuous decline since 2015, home hunting this summer is expected to be among the most competitive seasons on record, with only about 22 percent of the available stock of 1,224,336 homes priced for first-time homebuyers, according to Zillow’s March Market Report.

Home values nationwide have risen 8 percent year-over-year since March 2017, to a median of $213,146, with more than 51 percent of all available homes now priced on the high end, according to Zillow, which defines that category as home prices hovering around $375,000.

Median home prices in Las Vegas, Seattle and San Jose in the heart of Silicon Valley, meanwhile, rose by 15 percent or more. In San Jose, where median prices have soared by 25 percent since 2017 to nearly $1.3 million last month, 26 percent fewer homes are on the market since a year ago, according to the report.

“This year’s home-shopping season is shaping up to be even crazier than last, and sadly, the group that will have the hardest time is first-time and lower-income homebuyers,” said Zillow Chief Economist Svenja Gudell on Thursday. “These buyers will be competing for the few entry-level homes on the market, which are also the ones appreciating the fastest because of extremely high demand. One way to take the edge off would be an increase in inventory, but that is easier said than done.” 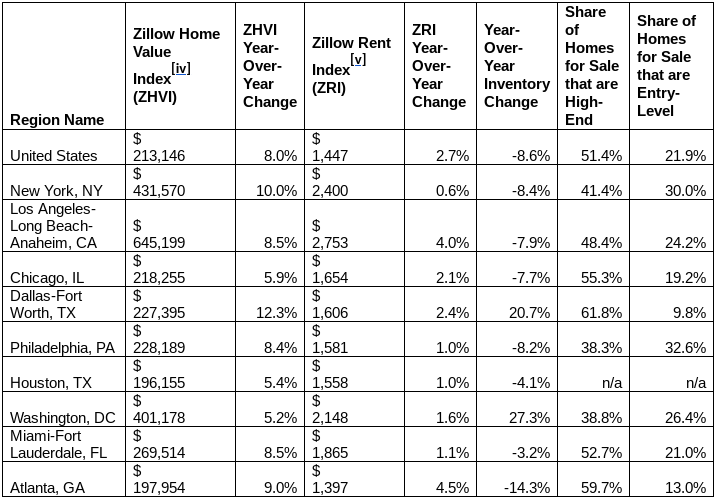 Although cities such as Washington and the Dallas-Fort Worth metro area did experience an inventory spurt, the overall national trends show that those who want to buy an affordable home are in for a challenge. Renters, however, will also feel the pain, as median monthly national rent rose to $1,447, up 2.7 percent. West Coast rent — particularly in Sacramento, California; Riverside, California; and Seattle — saw the three largest jumps in rent medians over the past year, according to the report.

“There are some signals a shift may be coming — construction activity is at its highest point in a decade — but buyers shouldn’t hold their breath,” said Gudell. “Getting pre-approved for a mortgage and finding an agent you trust can go a long way in helping buyers act quickly once the right home does become available in this otherwise tight and stressful housing landscape.”

Summer Chores for a Happier Home

Ah, sweet summertime. As the season of sun and fun gets underway, it’s also a great time to tackle summer projects to...

How to Make Your Backyard Feel Like a Resort

Once summer arrives, we all go into vacation mode, right? But why should we only get to enjoy that feeling for a few...

How Essential Oils Can Help You Sell Your Home

When a potential buyer for your home comes to look at it, you will need to make sure that it smells good. The smell of...