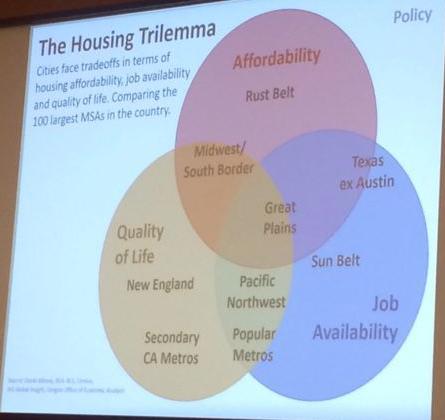 In fact, only two other metro areas have had a higher increase in median home sales prices: Boulder, Colorado and Casper, Wyoming.

That’s according to Bryce Ward, an economist with the Bureau of Business and Economic Research at the University of Montana. He gave a presentation on Wednesday to the Missoula City Council’s Committee of the Whole on the interaction among affordability, quality of life and wages here. Ward said that most cities try to find a balance between all three.

“What is it that determines whether people want to live in a place?” he asked. “You have to have pretty good jobs, you have to have a good quality of life and an affordable cost of living. But if you have all three, everybody would move there.”

Missoula obviously has an issue with cost of living, as evidenced by the high housing prices. Ward said that wage growth is not keeping up with housing prices here. The affordability index, which is essentially the median home price divided by the median income, has risen from 2.83 in 1990 to 5.04 today.

“That’s essentially the same affordability as King County (where Seattle is located),” Ward said. “The income levels in Missoula are about 85 percent of national levels.”

The regional price parity in Missoula, an index that measures the cost of living, compares to places like Atlanta, Jacksonville, Bend and Milwaukee.

“It’s cheaper than average here, but more expensive than the median city,” Ward said. “Missoula is cheap but not that cheap. The cost of living is below average nationally, but high for a community this size and growing more expensive at a rapid rate. And income is not keeping up with those changes.”

Ward said that part of the reason housing prices have risen here is because Missoula has such a good quality of life, with access to outdoor activities and natural wonders like mountains and rivers.

“There is a world in which people who have made their money elsewhere say this is a great place to live, but that doesn’t support opportunities for our kids,” he said.

City council member John DiBari requested Ward’s presentation. In his memo to fellow city councilors, DiBari said the presentation would be useful in advance of the strategic planning session the council and city administration are having on Dec. 19th and in advance of consideration of the 2018 budget.

“As council and the administration contemplate budgeting, which I believe is the manifestation of our city’s values and priorities, it seems useful to gain context regarding the socio-economic interactions that exist in our community and region,” DiBari said.

“In my opinion, it is important to understand the relationships associated with the quality of life, affordability, and wage triumvirate as we move forward with articulating and funding the policy directions important to the city and departmental work plans.”

DiBari said that he believes communities can address one or two of the three issues, but usually not all three at the same time, and Ward agreed.

“That’s the number one takeaway I want you to get from this,” Ward said. “You can’t just solve a problem (and pay) nothing. There are always trade-offs.”