The New Definition Of The Community Park 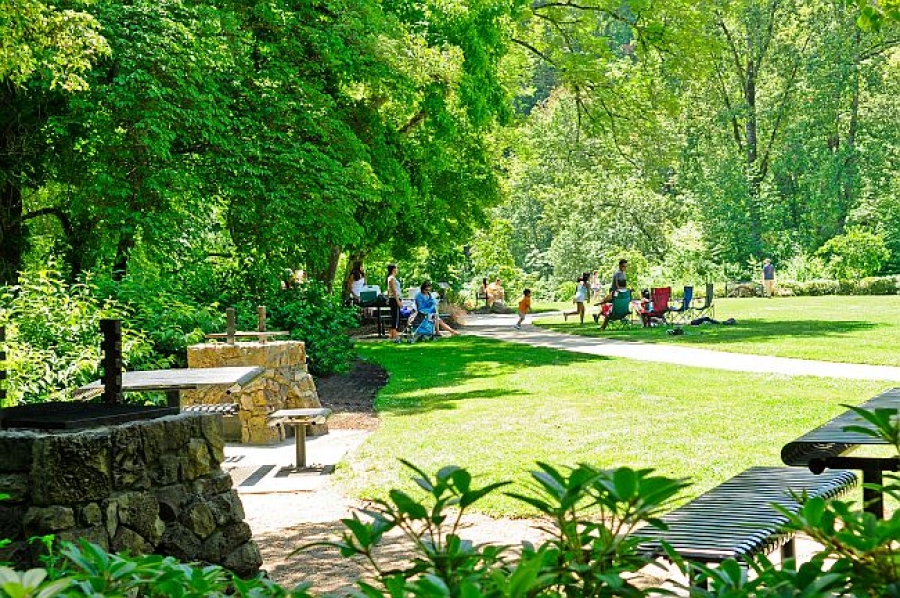 It boosts property values, helps the environment, improves public health and brings together people of all ages and cultures. It's free to visit anytime.

It's your local neighbourhood park and it's starting to get more attention from urban planners across the country.

"Parks are more than just parks today. Green, open space has to do double, triple and even quadruple duty. They have to be ‘the traditional park', but they're also cultural institutions, botanical gardens and providers of social services. It's a new definition of parks," says Robert Hammond, co-founder of Friends of the High Line in New York. Hammond recently took part in the TD Common Ground Project, which polled Canadians' attitudes about parks.

The survey says 95 per cent of Canadians agree that access to community green space will be important to their quality of life in the future. Six out of 10 people say they visit their local parks at least once a week.

"The old thinking was that we went to green spaces to connect with nature or take your dog for a walk," says Andrea Barrack, a vice president at TD Bank Group. "Today parks are really punching above their weight in terms of the goals they're able to achieve, like improving community safety, enhancing a sense of belonging and reducing isolation. People are now seeing these benefits coming from parks."

Ninety-seven per cent of respondents say that public picnic and eating areas are important for their parks, but the survey found that the top three reasons why Canadians use parks is to get away from it all.

"Relaxing on my own" was the No. 1 reason, cited by 43 per cent of users. "Relaxing with friends and family" was second, and "Connecting with nature" the third most popular answer at 42 per cent. Only 13 per cent said they mostly use parks to spend time with their pets.

Having playgrounds in parks is important to Canadians, according to the survey. Fifty-nine per cent of respondents say their kids spend less time outdoors than they did at their age.

"We tend to think of parks as playgrounds with artificial play structures but we should think more of the…enjoyment for children in having more natural elements: climbing trees; picking up logs looking for insects; wading through brush," says Marc Cadotte, professor of Urban Forest Conservation and Biology at the University of Toronto.

Adam Bienenstock, founder and principal designer with Bienenstock Natural Playgrounds in Dundas, Ont., says, "Living in urban centres, it's a question of what's missing -- and right now, what's missing is a full sensory experience. What's missing from many people's health and immune systems is all of those positive microbes, all of those bacteria, all those microbiota that make up their immune system. And you don't get that unless you touch a biodiverse environment before you're eight-years-old. We're missing that in our cities. We forgot that and didn't design for it."

Close proximity to community green space is the third-most important factor when people select a neighbourhood in which to live, says the survey. "Proximity to good schools" at 23 per cent and "easy access to public transit" at 19 per cent ranked just above access to a park at 18 per cent. It was ranked as more important than "walkable neighbourhood" at 15 per cent, "nearby amenities" at 14 per cent and "safety/low crime" at 11 per cent.

Bringing technology to green space, such as Wi-Fi and electronic device charging stations, wasn't a priority for most people surveyed. The most popular suggested enhancements were more public picnic areas, natural playgrounds and solar lighting. Most respondents say that parks must be inclusive and include benefits for families with young children, seniors and people with disabilities.

Eighty per cent said that government should take a leading role in funding green spaces, while 36 per cent said private enterprise could also get involved.

"We're really asking a lot from our parks. There's a great opportunity for corporations to participate in building the social and programming elements around parks," says Dave Harvey, executive director of Park People, an independent charity. "As we've seen an evolution in the ways parks are used, we're seeing some evolution from parks departments on being open to working with corporations in different ways."

Public Health: Having access to green spaces is associated with higher levels of physical activity and encourages people of all ages to have a healthier lifestyle.

Social Value: "Parks are social spaces where we can get to know our neighbours, build a sense of belonging and learn to understand each other better," says Park People. "Since they are free, open and accessible, parks offer potential as community hubs where people of different ages, backgrounds and abilities can come together."