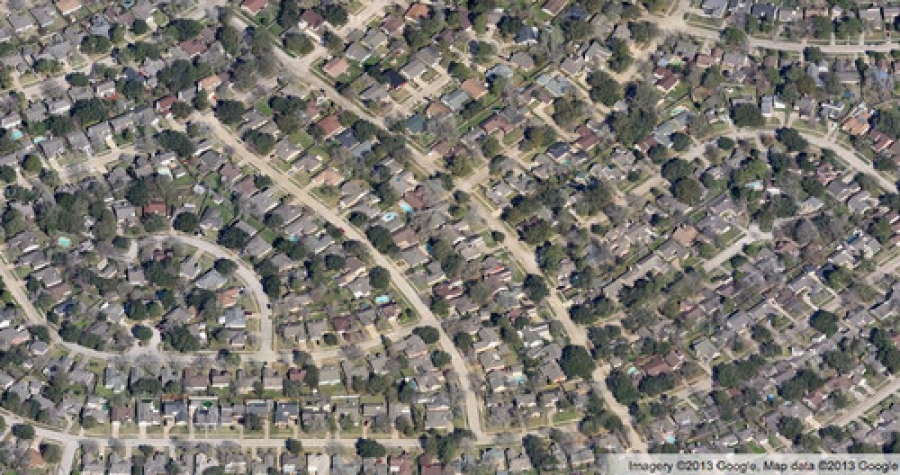 Even before Google allowed anybody with an Internet connection to see a satellite view of anyplace on the globe, I loved looking at books with aerial photography. A few favorites that focus on natural and human-made landscapes of the United States are Alex S. MacLean's Designs on the Land: Exploring American from the Air, Dolores Hayden's and photographer Jim Wark's A Field Guide to Sprawl and Alan Berger's Drosscape: Wasting Land in Urban America.

Flipping through these books again recently prompted me to look at America's housing patterns in Google Maps, particularly places for which high-resolution, 45-degree aerial imagery is available. The collected views reveal the diversity of the country's suburban housing in terms of scale and form, but also that much of it is what MacLean describes as "monotonous, sterile, inefficient and pedestrian unfriendly. It is missing a larger plan that goes beyond the responses to market forces, finances and restrictive regulations."

But all hope is not lost, as we'll see. So come along on a trip over America, taking in the good and the bad, the normal and the weird. All the views are at the same scale (a little less than 1/2 mile across).

Suburbia. The suburbs in the United States take many forms, having evolved, like cities, over time from the 19th century to today. This image of Katy, Texas, (near Houston) is of the type that often comes to mind when we think of the suburbs. It is actually a layout that is fairly indicative of developments in the 1960s and '70s. Instead of following a grid, like earlier suburbs did, the streets are curved. But unlike later suburbs, where the cul-de-sac predominates, the streets are interconnected and have only the occasional cul-de-sac.

Suburban-urban grid. As cities grew in the late 19th and early 20th centuries, they tended to follow the grid that Thomas Jefferson laid down in the 18th century. This view of Buffalo, New York, illustrates the adherence to the grid as well as relatively small lots and houses compared to what we see today. Many areas like this were suburban but have since become incorporated into many cities. Their density (number of housing units or residents per acre) is much higher than that of subsequent suburbs. Another major difference occurs in the presence of alleys, which disappeared after the post–World War II boom; nevertheless, we'll see some recent developments later that attempt to bring back alleys for garages and services.

Fairway housing. This view of Bend, Oregon, is fairly typical of suburban houses bordering golf courses. Their fronts face the streets that serve them, while the backs face the fairways and greens of the golf holes. Developments with houses and golf courses are now fairly common. The design of the streets, houses and golf courses have to work together, even though each has its own needs. As I pointed out in an article on walkability, golf course developments are extremely car dependent, given that it is necessary to drive a great distance to get to retail, commercial and other services.

Multifamily island. In the middle of this aerial shot of Bloomington, Indiana, is a multifamily housing development made up of about a dozen apartment buildings. Typical of much of the suburban landscape, the development is segregated from everything that surrounds it, such as the retail on the left. Residents must drive to it via one of two access roads. Note the recreation center with a pool that serves the apartment buildings, as well as the enormous amount of surface parking.

Greenfield housing. One of the most criticized aspects of sprawl is how land previously used for forests and agriculture is developed for housing and roads. This view of Columbus, Ohio, shows some houses that are pushed to the edge (for the time being), probably serving homeowners that can't afford houses closer to urban or other commercial cores. One way to tell this is the "end of the line" is the fact the power lines don't extend to the right.

Correction: The power lines do extend to the right, angled to the south and east.

Fly-in houses. At first this view of Cameron Park, California, may look fairly typical of the suburbs, but a couple of odd things come to the fore: Those roads are mighty wide (compare them with the road at the bottom), and the left-to-right road in the middle of the photo is connected to a runway. Yes, this is a community of fly-in housing, as Alan Berger calls it in his book Drosscape. After landing, residents can park their planes in hangars attached to their houses.

Canal houses. A variation on fairway housing, though not nearly as popular, is canal housing. Just picture the waterways between these houses in Palm Valley, Florida, as fairways. While this sort of plan — where water is used for both recreation and (to a lesser degree) transportation — makes some sense on the Florida coast, it can also be found in the desert Southwest and other areas where water scarcity would point to more suitable alternatives.

Houses on the water. Canal housing may offer the appearance of living on the water, but the previous example shows how the suburban norms (roads, yards) are still maintained. Houseboats, on the other hand, offer the reality of life on the water (waves and all) as well as the ability to move from one slip to another, or even to another city. This "neighborhood" of houseboats in Sausalito, California, is closer to the form of boat docks than suburban sprawl … although I guess each walkway could be seen as a cul-de-sac.